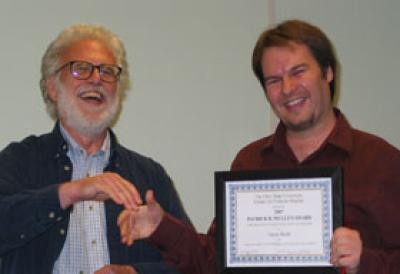 The Patrick B. Mullen Prize is awarded annually for the best graduate student paper or project submitted during the academic year. The Prize is given in honor of the significant contributions made by OSU Emeritus Professor Pat Mullen. Through his teaching, scholarship, guidance and friendship, Pat has influenced hundreds of students and colleagues both in and out of folklore. In 2005, Pat's friends, colleagues, former students and current students made possible this award through their contributions. In 2015, the Center for Folklore Studies created the Daniel R. Barnes prize for best undergraduate student paper in honor of the Professor Emeritus and to honor Dr. Mullen's friend and colleague.

For more information on becoming a recipient of this award, please see the Patrick B. Mullen Prize Call for Submissions.

Contributors to the Patrick B. Mullen Endowment Fund