Religion is all around us. You may not notice it because it is not prevent in your life but open your eyes and you will see the examples all around you. Typically when one thinks of a university they do not associate religion along with it. The Ohio State University is no different. Though there is evidence of public religion around campus, most of the time you come across it by accident or because it is prevalent to your life. All around campus there are flyers in the residence halls, people wearing evidence of religion, a huge cross displayed at St. Stephen’s Episcopal Church, chalk drawings and the chimes of Orton Hall on the Oval. Though the public around campus is not a religious site, there are still public displays of religion. You just have to look closely to find it since there is no set religion for campus.

“[On the Star of David] It represents our culture, I think that since there’s such a small number of us in the world having a symbol like that and being able to notice it around our community shows that although there are not a lot of us we are very tight knit and we can connect with each other and that symbol allows us to see that easier.” --Jackie Gillies

Religion within the public is a free for all. Anyone can express their religion in any way publicly; as long as it follows the law of course. Students and faculty of the campus who participate in publicly displaying religion typically have the evidence on their bodies. Whether it is a tattoo, a necklace or even traditional clothing from the religion. Jackie Gillies, an undergrad student from The Ohio State University, partakes in publicly displaying her religion. Jackie is Jewish and wears a Star of David necklace around her neck at all times. She never takes it off because the necklace is a way for her to stay connected to her faith, as well as a way for her to express it. I interviewed Jackie to see if her necklace, in her opinion, was evidence of public or private religion. In the end we came to the conclusion that it is public with private meaning. I have come to discover that most evidence of public religion is seen the same way.

“[About her necklace] I would say public because it shows who I am. It’s not something that I hide, I wear it because I’m proud of my religion and I’m proud of who I am. And so if I thought that it was private then I wouldn’t necessarily be wearing it and showing it to anybody who comes in contact with me.” --Jackie Gillies 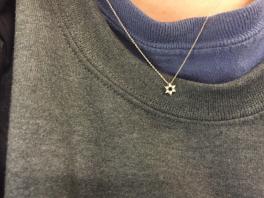 Not all public displays of religion are physical. Sometimes they come in the form of sound. Though not as frequent as a flyer or a religious tattoo may be, there are evidences of religion through sound on The Ohio State University’s campus. Religion does not have to be defined as “the belief in and worship of a superhuman controlling power, especially a personal God or gods”. There is another definition that inquires an activity that is of high importance or highly ritualized rather than the following of a higher power. The nontraditional definition allows the scope of public religion on campus to broaden because a student may not be religious but they may highly ritualize one topic or event. The chimes of Orton Hall is a perfect example of the nontraditional definition because the sound of the chimes is recognized by thousands associated with the campus; those religious and nonreligious. The chimes hold a higher meaning than just noise from a tower. The chimes are played at the start of Carmen Ohio which is the university’s alma mater. Some associated, especially current students and alum, with the university highly ritualize Carmen Ohio because it holds a meaning in their life and holds so many memories. There does not have to be anything that deals with actual religion for something to be considered religious.

“Well the thing about Carmen Ohio is the fact that it really relates  students to former alums. And somebody that’s a student down here, even with the former alum, when they hear ‘How Firm Thy Friendship’  that just really brings them back to their college days. The current students can relate to them by maybe the same experience that had or even followed by some of the memories they made might have been completely different generations but just hearing the chimes [Orton Hall] just brings them back and it just creates this unity.” --RC Perez 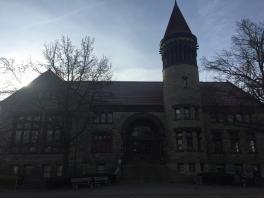 As stated before public religion does not necessarily have to follow the traditional definition of religion. As we know, the fan base of Ohio State University is enormous, and the alumni base is a little more than 500,000 people. Most of whom highly ritualize Buckeye sports and Carmen Ohio, and since it is highly ritualized it is safe to say that there are some religious aspects associated with it. For one it creates a community with whom, for those few minutes that the song is playing, you become friends with. This bond lasts a life time because once a Buckeye, always a Buckeye. I interviewed RC Perez, an undergrad student from The Ohio State University, to see his outlook on Carmen Ohio and to hear his perspective on if the alma mater  is religious or not in the nontraditional sense. And to him, as well as many other students and alum, Carmen Ohio is a special song that holds religious ties even though it is not a religious song. There is just a meaning and feeling that overcomes one after listening to it because Carmen Ohio is just that important in the lives of anyone associated with the university.

“And just those times especially towards the end of the game after we win and you hear the Victory Bells in the background and you lock arms with the closest people next to you and you just sing the alma mater [Carmen Ohio]. It just really shows how it can really bring an entire fan base together of your closest friends. Like I said before, it really creates that bond and that unity between you and 110,000 people.” --RC Perez 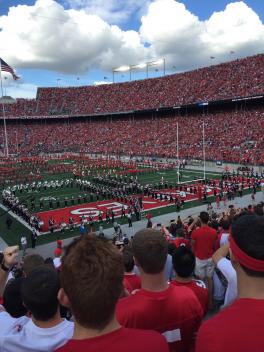 Campus is a way for students and faculty to express themselves freely and whether it is the traditional definition of religion or the non traditional way. There is evidence of religion all over campus from physical to sound. Most of the physical evidence followed the traditional definition of religion, while the sound went down the nontraditional path. With the nontraditional evidence more history of the source was needed to fully understand how it could be related to religion in any way. Also public religion can differ by season and time of year. Though Jackie wears her necklace everyday and Carmen Ohio is played all year round as well as the chimes from Orton Hall, you can only find certain things around certain seasons. For instance, I was able to find more evidence of religion around the holiday season because there is Christmas and Hanukkah, as well as other holidays associated with specific religions. There were Christmas lights all around and menorahs, also flyers for Christmas parties and Hanukkah celebrations. Also during this time of year it is football season and Carmen Ohio is played more than usual. But overall there is evidence of religion all over campus at any moment, you just have to open your eyes and your mind and look closely and you will find it.