“We’re not here to believe together, but to be together. And that’s really a very simple summary of what our practice is.” -Rev. Belletini

At the First Unitarian Universalist Church of Columbus (First UU) everyone is welcomed by the ringing of a hand bell in the entrance gallery to call one and all to the Worship Center.

(A handbell is used to welcome the congregation.)

The First UU is located in the Clintonville/Beechwold area of Columbus, Ohio. As a member of Unitarian Universalist Association (UUA), this church prides itself as an open and inclusive space where people of varied belief systems, backgrounds, and identities can build a community or support system. The First UU hopes to promote inclusiveness through multiculturalism. First UU often engages in social justice activism and initiatives. When we visited the First UU, many in the church pointed out to us the Tibetan singing bowl used for deliberative silence in their church as a main example of sonic experience representative of the First UU.

The Gathering and the Communing: Singing Bowl and Deliberative Silence

(This is sound of the temple bell ringing three times at the beginning of the service described as the “Gathering”. The temple bell signals and grabs the attention of the people in the church to be seated and attentive in the starting of the church’s service.)

The congregation is called to silence in preparation for the beginning of the service in the Worship Center at the First UU by the reverberating ring of the singing bowl resting on the stage beside the pulpit. Also referred to as the temple bell, the singing bowl was used to gain the attention of the congregation of the church. Once the bell rings, the congregation—scattered around in conversation with others—gather together in silence. The people of the church—many with eyes closed in unison—think upon the silence. 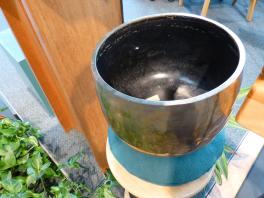 After the gong-like ringing, Reverend Mark Belletini described in his sermon that the deliberative silence is like sitting by a quiet pond under a shaded tree. The ringing of the bell could be described as a relationship between the people and the ritual created by the bell's sound. The created atmosphere allows the congregation members to think about what a deliberative silence experienced as a group means to them individually as well as communally. The relationship between the sound and the church may be significant due to the connection that it builds among the church people. Reverend Belletini seeks out universal silence however he realizes in a physical world, silence can never be perfect. Calming the body and mind allows one to relax or think in a unique way and so the church's deliberative silence together allows everyone to have a moment of community togetherness, although each member's interpretation of the silence is accepted and celebrated.

“There’s a subjective, inward thing, and I think that’s true for silence here [at our church] because the uniqueness—the individual uniqueness is prized here. [...] Even if other churches say ‘We believe in God the Father, almighty maker of Heaven and Earth,’ everyone understands that totally differently and for some people it’s just a sonic device; they say it every Sunday and it makes them feel like they belong. It doesn’t have any “real” meaning as far as theology goes. So I think that same thing is true for us [Unitarian Universalists], but I think one of the differences between us and other religious traditions is that we say so but above board and we say: Look, we’re all different, and we make community anyway. And we deliberately choose to make community anyway.” -Rev. Mark Belletini 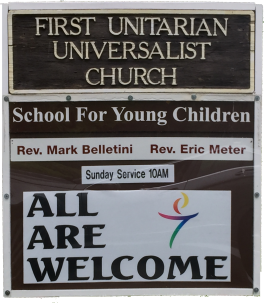 Our time at First UU showed how goals of multiculturalism and inclusiveness can inform what can be interpreted as a religious sound in Central Ohio. For example, at First UU deliberative silence was a sound with religious or spiritual dimensions through which individualistic expression or experience was valued. First UU interpreted that sometimes “secular” sounds, text, music, or poetry can be part of religion. The church hopes to promotes a multiculturalist methodology to its services through its choices of music, sounds, rituals, stories, poems, and other texts. Examples include events and services where folk music was played, African-American women's poetry was featured, or parables from diverse cultures were highlighted.

The church uses both the Singing the Living Tradition and the Singing the Journey hymnals. The senior reverend during our visit, Reverend Mark Belletini, wrote the lyrics for a hymn in Singing the Living Tradition which was sung in service during our recording session; he also helped with research for the book. These hymnals were created by the UUA and contain music from different denomination and sects, as well as some secular music; these pieces often have modified lyrics which speak to the inclusive ideas of the UU church such as by promoting community and hopes for a good future without invoking a particular supreme being or any supreme being at all. Reverend Belletini believes that music and sound can be impactful and hold religious meaning regardless of the place it is listened to or the association the music has with a particular “sacred” or “secular” tradition. In this way, First UU is inclusive to its music and sound.

(Reverend Belletini explains the importance of emotion in music.)

First UU wants to be welcoming to anyone and so another method for inclusion is the availability of assistive listening devices for the hard of hearing. Meanwhile, ASL interpretation for the deaf community is regularly available. This practice is to purposeful allow those with need of ASL interpretation to come at the spur of the moment, rather than in a pre-arranged, and therefore more intensive and othering process.