One of the band's biggest triumphs, in [France Jr.'s] memory, was the national Elk's convention parade in Philadelphia about 1946, when the band was about 75 members strong.  'People threw money,' France recalled.  Arthur Truhart, trombonist and band vocalist, sang Who Threw the Whiskey in the Well? into a battery powered megaphone, and it stopped the parade.
-- Carol Ann Lease, The Columbus Dispatch Magazine, February 10, 1980.

The Second Regiment Marching Band collection offers a look back at a long-lived African American civic band in Columbus that was led by a father and son (and others) over its 70-plus years.  John Peter Flemming France organized the first iteration of the band -- named The Ohio Malleable Band -- around 1900 as a company band for Ohio Malleable, Inc.  France changed jobs shortly after and took the band with him, renaming it the Citizens Band.  Soon after, the band joined the Knights of Pythias, a fraternal organization organized in military ranks.  Around the time of this merger, the band landed on its final name: The Second Regiment Marching Band.  The band took its name from the Second Regiment of the National Guard of the State of New York, which was called upon by President Woodrow Wilson to help pursue Pancho Villa into Mexico in 1916. 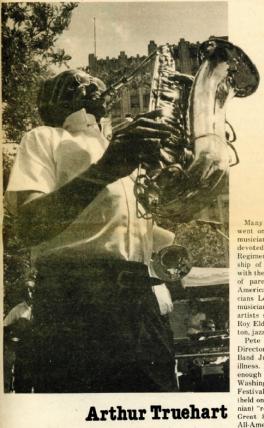 France's son, Peter France, Jr. left Columbus in 1921 at the age of 18 to tour as a musician with the six-man Whispering Orchestra of Gold.  France, Jr. toured primarily to New York and Cleveland until 1933. Sensing that big bands were on the way out with the rise of radio, he decided to settle in Columbus and began working at the Beatty Recreation Center on the Near East Side.  As his father had done, France, Jr. assembled a band at the Beatty Center -- a young peoples orchestra, which ran until it had to disband during World War II.  In 1943, The Second Regiment Marching Band asked France, Jr. to step in as director.  The band was a nonprofit, voluntary organization, and France, Jr. made his living as a custodian at Ohio State University's  graduate student dormitory, Jones Tower.

At the time of the collection in 1978, the band was simultaneously waning locally and and gaining recognition on the national stage.  France, Jr. retired as director of the band due to poor health in 1971, but resumed leadership briefly when the group performed at the Festival of American Folklife on the National Mall in Washington D.C. that same year.  Failing health caused many of the group's key members to retire in the 1970s, and they were unable to recruit enough younger musicians to continue the band.

A performance by the Second Regiment Marching Band can be heard in the audio files of the Gladden Community Folk Festival collection, also in the OAC collections.