The Rendville Cemetery: Past, Present, and Future

Rendville Cemetery Sign
Harry, Lydia, and Jacob in conversation in the woods behind the cemetery.
Lydia and Jacob interview Brent Bailey.
Harry Ivory stands next to his family's headstones.
Jacob and Harry cleaning off an old military headstone.
Previous Next
Body

In Spring 2020, the Rendville Historic Preservation Society (RHPS) and the Ohio State University Center for Folklore Studies began work on a preservation project focused on the Rendville/Scotch Hill cemetery. From Sunday, March 8th through Friday, March 13th, Ohio State University students Lydia Smith and Jacob Kopcienski worked closely with RHPS Vice President Harry Ivory to document the cemetery. Their overarching goals were: to develop a basic geographic profile of the cemetery; document the cemetery’s headstones; and collect oral history and folklore about burial practices, as well as individual’s historic and contemporary relationship to the cemetery.

Working with the Rendville Historic Preservation Society, we developed a website documenting the cemetery: https://u.osu.edu/rendvillecemetery/

This website serves as a living repository for the documentation of the cemetery we produced during that week. We hope the photographs, videos, and audio recordings make the cemetery more holistically accessible to the many former residents of Rendville who are unable to return.

This website also functions a space to continue collect oral history and folklore about the cemetery, the town, and their respective communities. Here we have shared a few of our experiences of the cemetery, as well as several stories and perspectives we collected during the week.  We hope that these will inspire you to share your own stories as comments under the pictures in the “Headstone Gallery” as well as the “Submit” tab.

You can participate by visiting one of the more than 200 individuals on known burial list and photographs of the 175 monuments in the headstone gallery and leaving a comment in memory. Clicking on an image opens up the image gallery, where you can browse the images using the left and right arrows and leave a comment in the text box below each image. If you know of someone buried in the cemetery that does not have a headstone, visit the “memorial for unmarked” tab to leave a story, memorial, or message in the comments section at the bottom of the page. If you have a longer story, series of photographs, or video about the cemetery or Rendville that you would like to submit to the website, please use the form under the submit tab.

Rendville: the Town, the Community, the Cemetery 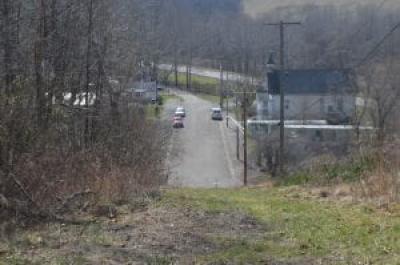 Rendville can be found quietly nestled amongst several small hills and ridges that line Ohio State Route 13 in southern Perry County, Ohio.  Rendville’s sleepy Main Street now earns the distinction of Ohio’s smallest incorporated town. But it was not always that way. Established in 1879 by mine owner William P. Rend, Rendville’s population quickly surged to 1,800 by the middle of the 1880s.  William P. Rend’s progressive hiring policies during this period also attracted 300 African American individuals to Rendville, endowing town with an enduring legacy of racial and ethnic integration and progressivism. Unfortunately, the collapse of the coal industry in the 1890s sparked an out migration from Rendville which would steadily shrink the town to its current state. Brent Bailey (a life long resident) and Harry Ivory (who grew up in Rendville) explained that in the mid-20th century, however, Rendville’s residents enjoyed the benefits of a tight knit community.

The 1890s also marked the beginning of another of Rendville’s enduring legacies: its cemetery. The Rendville/Scotch Hill cemetery is peacefully positioned on the town’s largest hill at the end of the  historic Main Street. Gentle winds blowing through the trees and sweet bird song create a calm atmosphere which is only occasionally interrupted by the sounds of cars passing below on Route 13.  More than 170 grave markers, representing at least 200 individuals, dot the cemetery’s grassy rolling hill. The oldest four sided pillar headstones from the early 1890s are found in the back of the cemetery, along its steep, tree lined western and northern borders. The engraving on many of these headstones has faded considerably, leaving only traces of names, dates, and other inscriptions. Some of the more precariously placed headstones have even toppled over.

The most recent burials from 2019 are found in the front of the cemetery close to the old Main Street, which marks the cemetery’s eastern border. White headstones and American flags marking veterans from the Civil War War through Vietnam appear throughout the cemetery next to parents, wives, and children. The headstone for Sophia M. Mitchell, Ohio’s first African American female mayor (one of Rendville’s many “firsts”), can be found resting beside her family near the shade of a large tree. Much can be learned by walking through the cemetery and getting to know the stories behind each headstone. However, we quickly learned that this was only part of the story. 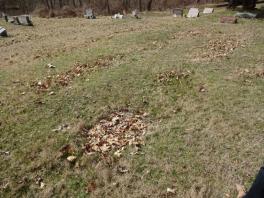 Prior to our week in the cemetery, we had heard stories that the back portion of the cemetery was disturbed during construction work that expanded Route 13. On the first day of the week, we (Lydia Smith, Jacob Kopcienski, and Harry Ivory) surveyed the woods below the ridge that marks the cemetery’s western border. We found three headstones in the back of these woods near a chain link fence overlooking the highway. These headstone bore the names Alverna L. Fountain (1945-1959), Laura Hughes (1882-1959)  William A. Scott (1894-1964), and were positioned within a row of unmarked depressions in the ground. We were unable to determine whether or not these depressions represented completed burials. However, the depression in the woods resembled similar depressions in the ground in main part of the cemetery, which were caused by the earth settling after a burial. 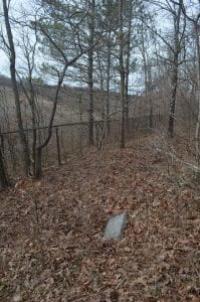 The subtler depressions in the main part of the cemetery often contained long grass and leaves. While we found headstones accompanying some of these depressions, many did not have a headstone or permanent grave marker. These unmarked depressions did not, however, represent the full extent of the many unmarked graves in Rendville’s cemetery.  We learned that many people were unable to place a headstone or permanent grave marker by their loved ones who otherwise had a proper burial. While we discovered two homemade headstones (for Clyde A. Smithers and Junuas/John Harris), many remain unmarked and invisible in the landscape, known only to the family and friends present at the burial. 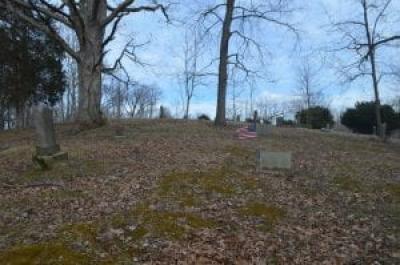 Throughout the week we heard many stories of people visiting the cemetery alone or in small groups to meditate, reflect, and reconnect with their history. Those that visited the cemetery with these intentions often visited family members, kin, and friends buried in the cemetery. Many indicated that serene environment also provided them a place to remember Rendville’s history as well as their place within it. During our fieldwork we found the cemetery a peaceful place to reflect on Rendville’s history, as well as enjoy the natural beauty of southern Perry County. Daily choruses of birds and vibrant yellow daffodils routinely brightened our day:

We also learned that the annual Memorial Day and Decoration Day festivities served as moment for communal gathering and reflection. The Veterans Association would come and place flags on the graves of service members, blow taps, and even give a twenty one gun salute. Many family members of the veterans would also attend, once again lining the main street with cars. Along with Emancipation Day in the fall, these events allow Rendville’s former residents to connect with one another and honor the special community that existed in the town.

The cemetery also draws casual visitors for other reasons. We learned that until very recently cell phone service in Rendville had been spotty, and the cemetery hill was frequented for its strong and consistent cell service. Despite these recent improvements, we still observed several drivers park their cars in the small turnaround on the cemetery’s Northeast corner to make a phone call or use wireless data. Although they often had to compete with utility trucks and workers, who were working on the power and phone lines throughout the week.

Visions for the Future

Throughout the week many individuals expressed an interest in starting projects that would illuminate the cemetery’s legacy for future generations. Many expressed interest in creating a physical memorial for those who did not have headstones and  former residents who were not buried in the cemetery. Ideas for this memorial often doubled as necessary improvements to the cemetery, including proposals for a memorial walkway, bench, or wall near the front of the cemetery. Others proposed creating plaques, maps, and other informational materials that would mark important figures and sites of interest in the cemetery.  Harry Ivory explained that these projects play an important and urgent role in preserving Rendville’s history, and passing on its legacy to future generations.

Some suggested projects focused on more immediate and practical improvements to the cemetery. These projects included: adding a fence to clearly mark the cemetery’s boundaries; restore and preserve the older and deteriorating headstones; and negotiate for better and more careful lawn maintenance services. Brent Bailey added that preservation efforts should include projects that improve the infrastructure, quality of life, and community in Rendville. He explained that while the cemetery defines Rendville’s enduring historical legacy, plans for town’s development and improvement will play an equally active role in its future.

More information about Rendville and the Rendville Historic Preservation Society can be found here: https://rendvillehistory.org