In the early part of the twentieth century, Lenora Hammond Lapp worked with her husband on a modest farm just northwest of Chillicothe in Ross County. She had married Jacob Lapp in 1915, and together they raised geese, chickens, and other livestock. In addition to meat, the Lapps sold cream, eggs, and produce to their neighbors in the area. As the years progressed, the Lapps pursued new business ventures: beef, clover, and soybeans, to name a few. Lenora, a former schoolteacher, kept records of many of these transactions in composition notebooks she must have had on hand. Two notebooks survive to this day.

Over eighty years later, Lenora Lapp’s granddaughter works on her own family farm. Barb Bradbury and her husband operate Hurricane Run Farm near Otway, Ohio, in Scioto County--less than sixty miles south of the old Lapp Farm. With seasonal orders for dandelion jelly, rhubarb, tomatoes, kale, and other fresh organic produce, the Bradburys are kept busy with deliveries and visits to the local farmers’ market in Portsmouth. And, like Lenora Lapp decades before, the Bradburys keep records of orders using handwritten notations logged in notebooks.

When looking through her grandmother’s farm record books, Barb Bradbury was struck by how similar they seemed to her own records of sales. The lists of customers, products, and deliveries found within these books echoed the rhythms of a family-owned farm even as they revealed economic and societal change from the 1930s to today. While her grandmother chronicled sales of poultry, sausage, eggs and beef, the Bradburys’ own records include kale, lettuce, beets, granola, maple syrup, and homemade bread.

In March of 2018, we sat down with Barb Bradbury to digitize Lenora Lapp’s notebooks. As we scanned the pages and logged keywords based on Lenora’s pencil-written notations, the significance of her daily activities began to emerge. The farm books included customer addresses, delivery directions, seasonal orders, shopping lists, dessert recipes, income figures, “poultry remarks,” and more.

These farm books mark the intersection of business and community life on this family-run farm. Decades-long customers, grocer connections, church and farming organizations--all of these affiliations can be found within the pages of the Lapp farm books. We can get a sense of their community network by examining the accounts, delivery schedules, and directions Lenora made note of from their day-to-day business practices.  For example, in the later farm book, one page marked “Money taken in for everything = 1957” details the sources of income for the Lapps, including refunds from the Farm Bureau, payments from Carter Feed & Grains, and money from Miami Poultry, as well as individual sales to customers like Buchanan, Flynn, and Beard (see below). We have records of their gasoline tax refunds and corn and wheat loans, demonstrating how the Lapps managed their farm with the resources they had on hand while making use of the community connections that were available to them at the time. 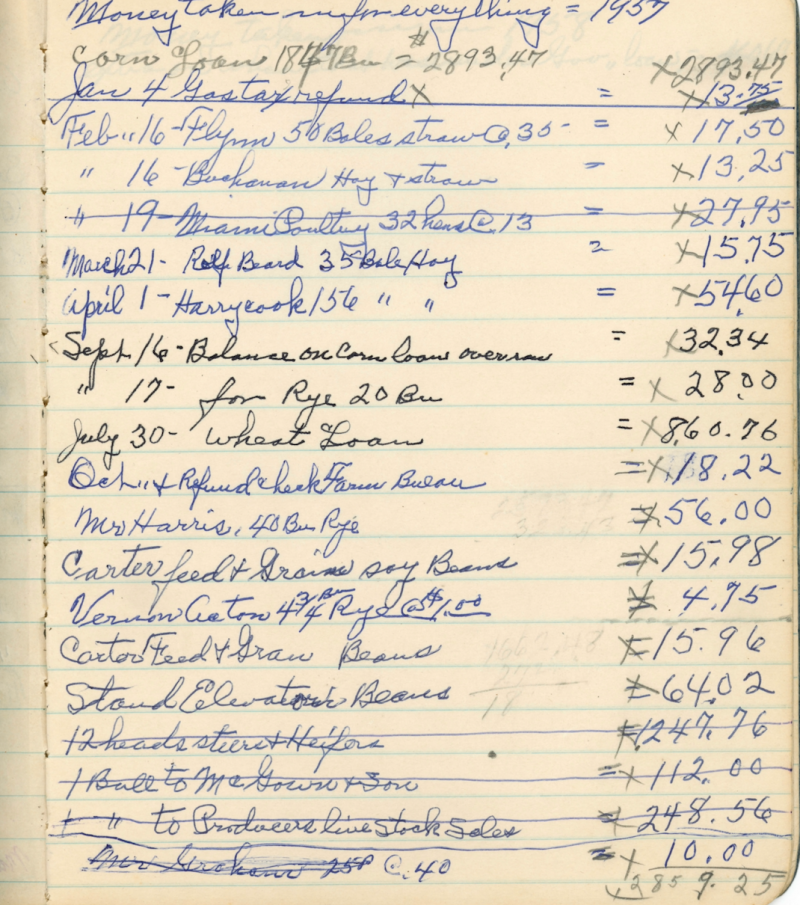 As we sorted through old photographs, letters, and additional documents from Lenora Lapp’s life, we began to round out an image of her as not only a farmer and businesswoman, but also a teacher, wife, mother, and grandmother.  Her social and economic network of friends, customers, and fellow church members emerged not only through records of sales, but through group photos of her university classmates and the students she taught, and photos of her as an older woman stirring apple butter at a church event. Letters between Lenora and her husband, one of her former students five years her junior, showed a tender and playful side to their relationship at an early stage.  Many of the photos in a scrapbook curated by Barb’s mother depicted her mother-in-law with her only son, Barb’s father Robert, when he was a boy growing up on the farm. A handwritten note from Lenora’s latter years reflected with satisfaction on the good life she had shared with her husband.

“Jacob farmed the land and raised Herford cattle. I raised 600 chickens some years. And best of all we enjoyed our lives together for 43 years.”

The community networks revealed in the Lapp and Bradbury books, like other aspects of the books, show both commonalities and distinctly different features. In both cases, the farms represented in the books were actively providing the foodstuffs sought by their community members, whether poultry, pork or beef in Lenora’s time, or kale, maple syrup, and granola in Barb’s day.  Each book details a delivery network in driving distance of its farm. While we continue to wonder about details of Lenora and Jacob’s delivery system, such as how customers placed their orders and what vehicle was used to make their rounds, Barb described in detail her weekly routines, including farm market activities and individual deliveries. It is interesting to note that Lenora began her farm business following an earlier life as a teacher, while Barb’s organic sales expanded into a more serious business after her retirement from her years of work in education.

The Bradburys’ commitment to taking an educational role not only in their community, but in fact with a worldwide reach, is seen in those who visit the farm.  They have welcomed local school children for day trips to the farm.  The farm regularly hosts college students and others interested in spending time working on an organic farm through their participation in Worldwide Opportunities on Organic Farms. In this way, their knowledge and experience are being passed on to others, and the farm provides a place for many to learn, work, and relax. Finally, we are grateful to the Bradburys for their many contributions to the Ohio Field School project, including this fascinating glimpse into farm life that the past and present farm books provide.

“We’ve always grown more than we needed for ourselves, and so selling it is a nice bonus. We’re gardening anyway, so why not sell the extra?”