Choruses of “Ms. Deacon” resound throughout April Deacon’s fourth period classroom. The experienced art teacher, with a warm face and colorful round glasses, patiently shifts from group to group. She teaches a new technique here, delivers the much-coveted colored pencils there. In her few down moments, she’s sorting through art supplies – many of them donated by local community members – and coordinating the most recent phases of the Human Rights Garden. Soon she’s up again, congratulating one student about last night’s Quiz Bowl victory, steering another away from the tracing table. A few hours into the day and we folklorists are already flagging. While Deacon later admits to being tired, she rarely lets it show. She rotates calmly among the tables – all the while reminding students to “Make good choices.”

This much-repeated phase perfectly captures Deacon’s teaching philosophy. She began teaching art at Waverly High School in 2003, and quickly learned that her “number one job is to be a good educator and role model.” Now at Portsmouth High School, Deacon uses integrated-art and community-based projects to model critical citizenship, promote educational empowerment, and encourage students to take care of one another.

“It was pretty obvious my very first year teaching that my real job was not about color and texture and line and space and those things – and I love those things and I make my own work and I love art – but I think it’s a great vehicle for teaching people to be good human beings.” --April Deacon

Visiting artist, Kelly Babcock’s, way of looking at things is colored by years of graphic design and working with individuals from all walks of life. Growing up in Cincinnati, Ohio, her parents sat her down with a computer so she could learn the ins and outs of Adobe Illustrator and Photoshop. By high school, she was freelance designing for notable businesses, like the Newport Aquarium in Newport, Kentucky. She later pursued a BFA in Design with a minor in Marketing from Miami University in Oxford, Ohio. While there, she met her husband, a Portsmouth native. After moving to Philadelphia for a few years, in which Babcock earned a master’s degree in Design from the University of the Arts and established her own freelance business, the two decided to settle in Portsmouth.

Babcock’s past experience with youth made her an ideal candidate to join April Deacon as a visiting artist for Phase III of the Human Rights Garden and food pantry project. Babcock’s master’s thesis involved teaching high school students aspects of Human Centered Design; she’s done similar work with youth in libraries, and in Spring 2018, she volunteered at Clay High School to create a photo book of the community. Despite some early challenges engaging the Portsmouth High School students, Babcock speaks with passion about creating new opportunities for them and celebrating their own creative confidence.

“This is your best asset - you and your mind and your way of looking at things. That’s really valuable.” --Kelly Babcock 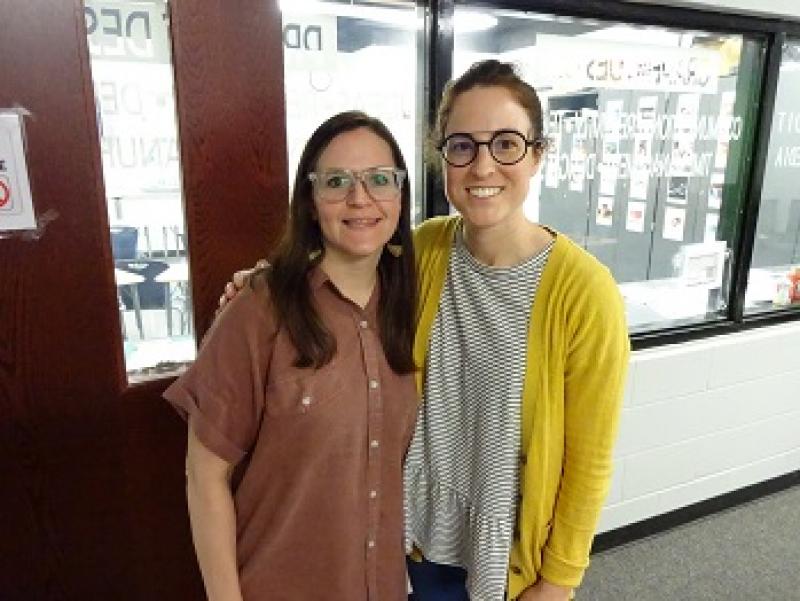 We, Tony Maggio and Aubrey Helene Neumann, met Deacon and Babcock while visiting Portsmouth High School as part of the Ohio Field School course. In addition to gaining a better sense of life for this younger generation of Portsmouth residents, we learned more about the Human Rights Garden and food pantry project. Spearheaded by Deacon, with funding from the Ohio Arts Council, this ambitious four-year project aims at educating students as to their human rights through arts-integrated, community-based work.

View a contextual map of the Human Rights Garden!

Aubrey and I spent the week of March 12th helping with April Deacon’s various art classes at Portsmouth High School. At 8:30 in the morning until 2:15 in the afternoon, from Tuesday until Friday, we spent time with April and her students as they worked on their art projects. The week that we attended classes happened to be the end of the nine-week period and the last week before spring break; so, the students were supposed to be finishing most of their art pieces and turning them in for evaluation.

I spent my time in the classroom rotating between observing and assisting. First, I would sit and watch the students as they worked. I took in the general shape and feeling of each class. Art 1 was full of freshmen and sophomores, and they were less focused on art and more on each other. AP Art was small and productive. Each group of kids had their own personality. Eventually, I would get up from my corner of the room and walk around, getting a close look at each student’s art. Often, I would ask them about their process or why they chose certain elements. I would receive varying answers from “I dunno” to a long story about how they created an entire universe of characters in their minds. As I expected from a bunch of high schoolers, most of them remained fairly closed off to me, especially at the beginning of the week. However, I did get to know a couple students well.

When I felt like I had observed for a while, I would take a more hands-on approach to the students. I would help them think of ideas for their projects, keep rowdy groups of kids focused, clean the glitter off from tables, or ask April what needed to be done. Most of the time she would tell me that I didn’t need to do anything, but that’s okay. April commanded her classroom with caring and respect, and she always had a handle on what was happening. 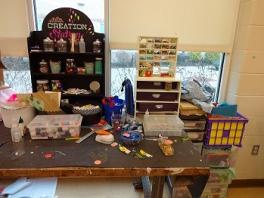 Approaching April Deacon’s art classroom, students are bombarded with a barrage of positivity. A dozen black and white posters decorate the first set of doors. Inspirational quotes, ranging from “It all Starts with Art” to “Live Your Dreams,” encourage students to think big. While the colorful statement peeping through the door windows, “You Belong Here!” lets them know in no uncertain terms – this room is for them. The positivity continues as students enter the room. The high walls are chock full of inspirational quotes - including Keri Smith’s advice on “How to Be an Explorer of the World,” colorful art posters, and past students’ art. Art supplies are squeezed into every corner of the space. Despite a shrinking budget, Deacon’s resourcefulness keeps the room full of possibilities. Students and teachers stop by throughout the week to donate odds and ends to the found objects bins at the front of the class. The “Creation Station” houses smaller donated goods, as well as an abundance of glitter. Deacon banished the stuff after an impromptu glitter war but brought it back because, as she explained, it makes some of the students so happy.

Though at times both Deacon and her fellow teachers referred to the room as a mess, we loved the jumble of colors and words, not to mention the agency students showed while navigating the space. Students crossed to drying racks, grabbed odds and ends from the Creation Station, and searched for inspirational images at the computer all without direction from Deacon. This is not to say Deacon was not available to help or that all students stayed on task. However, most students knew what they should be doing or could turn to one of their peers for help. Though required to complete specific projects, the guidelines allowed for a fair amount of creative leeway. When asked to combine images of plants and the body, one student drew a scull wearing a football helmet with Buckeye leaves in the background – successfully incorporating his love of the OSU football team into the assignment guidelines. Deacon and the creative mess make space for student agency both in their actions and in their art.

On Wednesday, the Art and the Community class took a field trip to an antique shop to buy found objects for their art projects. When we arrived at the store, the students were reminded of our goal and the rules of engagement. Then they were cut loose. For the next hour or so, we meandered about; following the students as they went from floor to floor looking at all the options. The walls were jam-packed with glasswork, novelties, toys, clothes, furniture, memorabilia, and oddities of all kinds. Tony was tempted to break out his own wallet and dive into an antiquing frenzy, but he had to restrain himself. We were adults and chaperones. We had to be responsible. For the most part, we tried to act as guides and lookout for the students as best we could. We would try and suggest a purchase from time to time, but the kids knew what they wanted, and our ideas weren’t it. After everyone’s appetites had been satiated, we all piled back onto the bus and returned to Portsmouth High just in time for last period. Everyone dumped their items in a pile and went to their classes. Some hung back to try and finesse their way into skipping last period to “help” Deacon clean, but much to their avail, she sent them on their way. They would be sorting through their treasures the next day in class.

There is a tendency, when thinking of small-town USA, to imagine sprawling farms and close-knit communities, and when thinking of downtown big cities to picture poverty, need, and socioeconomic divisions. Portsmouth is neither of these. It has the distinction of being a limnal space between the rural and urban. It’s has the space and relationships of a rural setting, and the poverty and negligence of an urban neighborhood. These themes reoccurred throughout conversations with April Deacon, Kelly Babcock, and some of the students we met.

Other students were less inclined to discuss these issues.  Some wish to avoid negative stigma.  For others, this hard-to-grasp lifestyle may just be commonplace.  Deacon began the Human Rights Garden as a means of educating students about their rights and allowing them to create constructive change within in their community.  As the project has progressed, these two goals have occasionally come into conflict with one another.  Being asked to explore human rights violations closer and closer to home makes creating constructive change all the more difficult.  Students and teachers alike are having to take a close look at their community and bravely push forward.

“We’ve had some problems with them really being engaged and digging deep and thinking about the project. So many of them are living this, so I think it’s difficult for them to talk about food and security and that they may, in fact, be food insecure. But, we’re working through it. They’ve made some progress and definitely are on a more positive move here. They are thinking and producing.”  --April Deacon

On our final day of classes, we decided to spend some time with the kids themselves. We thanked them for their time with rice crispy treats, and Aubrey took over the Art and the Community class. She led the group in some drama games, like throwing snaps around the group like balls and acting out scenes from our childhoods. We all participated, even April, and we all had a blast playing the games. At the end of the day we said our goodbyes. We knew that we would be missing these kids more than they would be missing us; but we couldn’t help but feel attached to them after spending the week with them.