The study of the folklore of any given group provides unique insights into the preoccupations, concerns, and values at play among the people involved that more formal avenues of exploration might miss. The internet folklore which circulates among The Ohio State University (OSU) student population is no exception, hence the creation of the OSU Folklore Archive Student Digital Folklore Collection (SDFC).

The aim of the SDFC is to gather, document, and preserve iterations of digital folklore as it is shared among OSU students. This includes memes, TikTok videos, Instagram threads, etc. as well as future forms as yet unknown. The SDFC is focused on folklore which points to aspects of the experience of being an OSU student; for example, concerns regarding safety, housing issues, relationships with peers and instructors, campus life, etc.

You can look at some of the items in the SDFC at its dedicated webpage.

HOW TO INCORPORATE THE SDFC INTO YOUR COURSE

Submissions to the SDFC can function as excellent and absorbing assignments and/or as opportunities for extra credit within most folklore and folklore-adjacent courses. We recommend asking your students to contribute two to five iterations, along with completed Submission Forms and Consent Forms. The Consent Form can be downloaded below:

The Submission Forms must be filled out online alongside uploads of the digital folklore file and a completed Consent Form. Please contact the Center for Folklore Studies for a link to the form, which will be unique for your class. Once submissions are complete, you will be sent all the submitted assignments as PDF files. So that your students can prepare their answers to the questions on the form, a copy of the submission form's questions is available below. Please advise your students to save a copy of their answers before uploading them to the online portal.

Regarding the completion of the Submission Form, it is important to stress to your students that they should imagine they are filling out the form as if for a researcher one hundred years or more in the future. They would do best to envisage someone who has little idea about the current cultural and sociopolitical climate, no knowledge of any of the popular culture figures or college personnel represented in the folklore iterations, and little to nothing about OSU. As a result, they are likely to need to give much more information than they otherwise expect. Examples of Submission Forms completed by former students can be found at the main SDFC page.

When thinking about explaining to students what contextual information to include, ask them to consider the following two cartoons. (To aid you in this, we have created the following PowerPoint display for you to incorporate into your class presentation.) 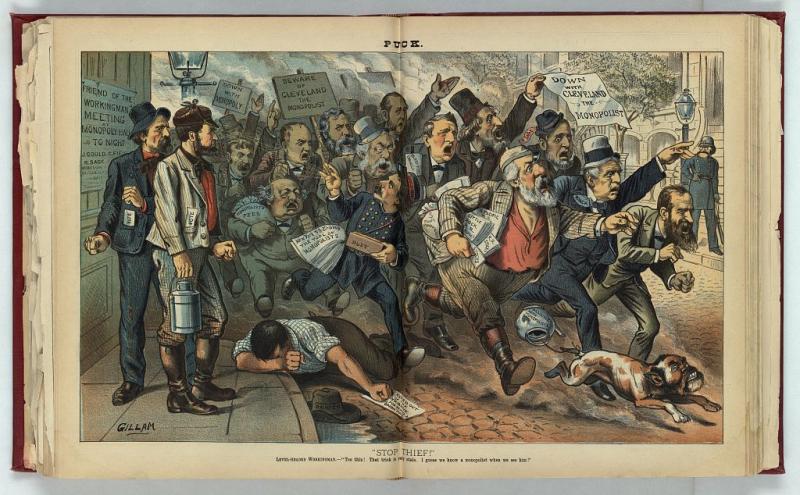 “Stop Thief!” by Bernard Gillam was published by Keppler & Schwarzmann on August 6, 1884. This image is in the Library of Congress and is accompanied by the following information on the Library’s website:

Illustration, reminiscent of Thomas Nast's cartoon of the same title published in Harper's Weekly, October 7, 1871, hence "That trick is very stale", shows a group of monopolists and Blaine supporters scattering on the street in response to the cry "Stop thief!"; Joseph Keifer carries a sign that states "Beware of Cleveland the Monopolist" and Cyrus Field waves a sheet that states "Down with Cleveland the Monopolist". Among the pursuers and those being pursued are William W. Phelps, Benjamin F. Butler carrying a bag of "Monopolist Fees", Robert Ingersoll, Keifer, George M. Robeson, Whitelaw Reid throwing "Dust" in the eyes of workingmen, Alonzo Cornell, Field, James G. Blaine carrying a bag of "$ from Monopolists" and "R.R. Stocks", Russell Sage, John Roach, and Jay Gould, as well as a dog with the face of John Kelly(?), and with a teapot labeled "Alliance with Monopolists" tied to its tail; all are determined to look like pursuers, instead of the object of the pursuit. Carl Schurz, dressed as a policeman, is standing on the sidewalk at far right. Two laborers are standing on the left, next to a sign that announces "Friend of the Workingman Meeting at Monopoly Hall To Night - J. Gould, C. Field, R. Sage, Robeson".

Despite the many details offered in the description, it is still hard to make sense of the cartoon because most contemporary viewers would need to conduct further research regarding the people named and the other information offered in order to fully comprehend all that the cartoonist intended to convey with this work. 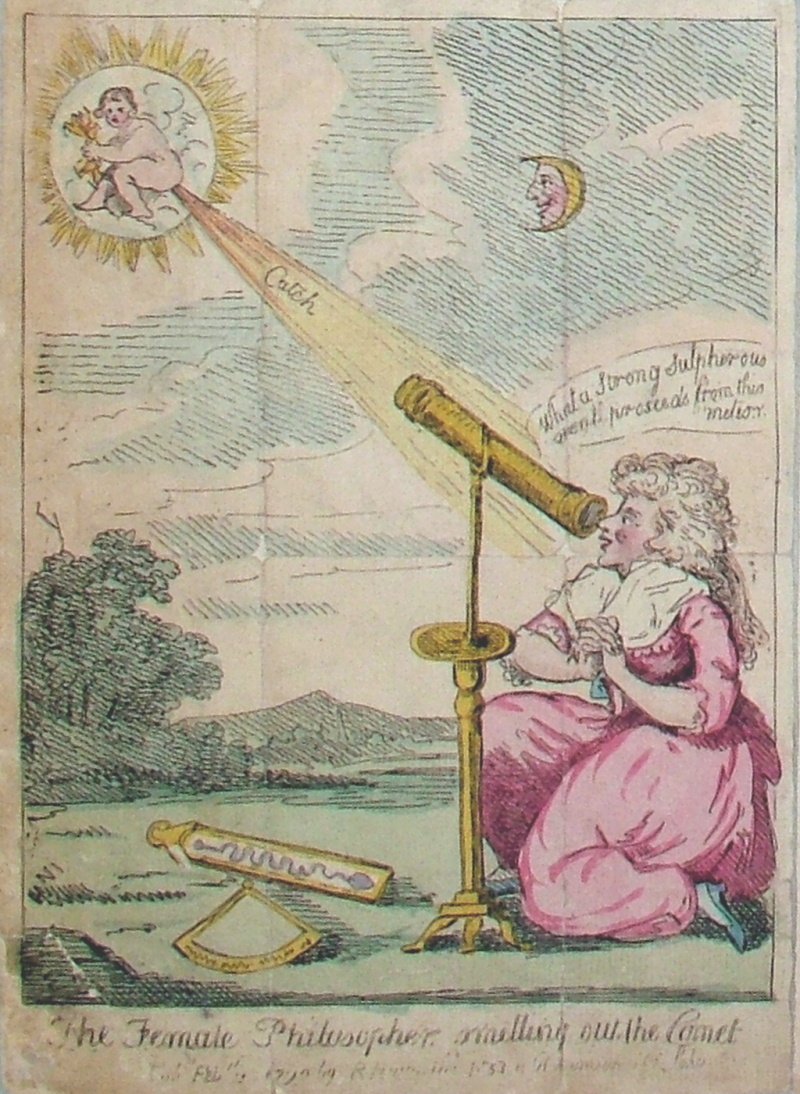 By contrast, take a look at this cartoon which is in the OSU Billy Ireland Museum and Library collection. Dating from 1790, the image is taken from page 16 of the Hale Scrapbook 1746-1830 and its message would ordinarily be largely incomprehensible to most modern viewers. However, Billy Ireland researchers have added the following information on their website;

The massive Hale scrapbook contains rare British cartoons, engravings, letters, and clippings dating from approximately 1746 to 1830. The original creator of the scrapbook is unknown, but it was probably made to document the history of the time period and to provide a source of entertainment.

[The cartoon] makes fun of Caroline Herschel, the first woman to be paid for her work in the sciences. Born in 1750, she became interested in astronomy while assisting her brother, William, who discovered the planet Uranus and was George III’s court astronomer. Caroline independently discovered eight comets, including two in 1790, the year this cartoon was published. The cartoonist ridicules her, perhaps for stepping outside the bounds of the accepted domain of women at the time. In 1828, Caroline Herschel became the first woman to be awarded the Gold Medal of the Royal Astronomical Society. She remained the only woman to receive this prestigious award until 1996.

As a result of the contextual data offered by the Billy Ireland, the cartoon makes a great deal of sense to the contemporary viewer, despite having been published well over two centuries ago.

We have prepared a series of PowerPoint slides that show both cartoons along with contextual data which you can access below and incorporate into your own class presentation.