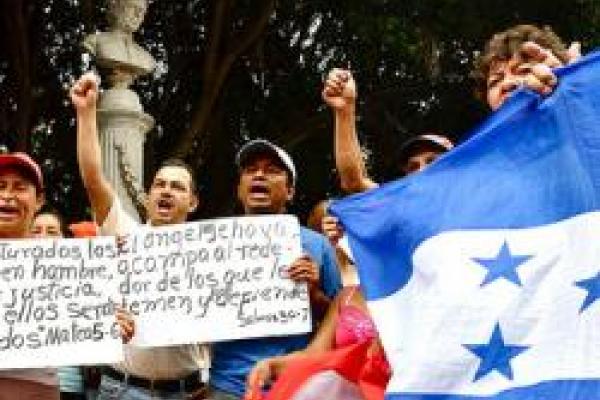 On June 28, 2009 Manuel Zelaya, president of Honduras, was kidnapped at gunpoint from his home and flown to Costa Rica by members of the Honduran Army. Many believed that the coup was triggered by the President’s recently initiated left-leaning reforms. These reforms included: raising the minimum wage, favoring campesinos in land disputes, decreasing military influence through administrative reorganizations and joining ALBA, the Bolivarian Alliance. Initially, the international community unanimously denounced the coup. However, within days the US reneged on this position, claiming nonintervention as its goal.

Immediately after the coup the Honduran military declared a state of emergency that many would argue exists to this day. Twenty opposition journalists, seventy LGBTQ activists and sixty campesino activists have been murdered. On November 18, 2012 Honduras will hold primary elections. In the run-up to the elections human rights abuses have increased exponentially. In September twenty additional activists and opposition candidates were murdered, including 2 human rights lawyers. Other abuses include threats of violence, beatings, forced displacements and rapes.

The current scenario in Honduras represents a grim setting for democracy. Allison Fish and Katey Borland will join thirty other volunteers and North American representatives of civil society on a delegation aimed at witnessing the primary elections and accompanying voters and opposition candidates. This talk will report the initial findings of the delegation. In addition to volunteering, we are interested in understanding the role of such groups in advancing the international human rights agenda. Who volunteers? How do they foster and maintain meaningful connections with members of Honduran civil society and/or with each other? How do their experiences on the ground in Honduras feed their broader understandings of solidarity?