Once a month, Center for Folklore Studies Director, Dr. Katherine Borland, and Assistant Director, Cassie Patterson, take fieldworking excursions throughout the state of Ohio in order to learn more about folklore in the state and to make connections with people beyond university walls. Check back next month for more updates!

on Broad St. & Pasadena Ave, across from Neon Moon Saloon

Lonnie Ervin, manager at Tire Station in New Rome, built a 6-foot tall muffler man out of parts he had on hand in the shop he manages on Broad Street and Pasadena Avenue. He built it in March of 2014. This is the second muffler man Lonnie has made. The first one stood 4-feet tall and held the shop sign for the automotive shop he used to co-own in Mt. Sterling. Unfortunately, that first one was stolen, so when he made the muffler man for the new shop he was sure to make it too hard to steal. The new muffler man weighs about 90lbs! His new creation has other special touches: he has eyes, a nose made out of a hammer head, and holds a wrench and a tire iron in his hands. Lonnie said he made the sculpture out of parts and scrap that were lying around. He hopes it will call attention to the shop. This summer Lonnie plans to build a muffler woman. He says we are the first people to stop by and comment on his creation. Lonnie is originally from London, OH.

Dr. Richard Santho's office off of Sullivant Avenue in Hilltop features a giant wooden tooth carved out of an old tree trunk. (Yeah, that's right--read that sentence again!). In summer of 2010 the tree in front of Dr. Santho's office was struck by lightning. The tree had to be taken down, but he wanted to salvage it in some way since "it's been there forever." He first tried carving the tooth himself, thinking that the 3D teeth he had to carve out of wax in dental school was sufficient preparation. After falling down with a running chainsaw in his hand (his livelihood!) he decided to call in an expert. Dr. Santho came across a man who does professional wood carving when he was traveling to visit his kids, who were attending OU.  The Chainsaw carver, whose name he can’t recall sold his sculptures on the side of the road, somewhere near Nelsonville. Dr. Santho asked if he'd be willing to carve a tooth out of the tree trunk.Since it's creation the tooth has been touched up and repainted about three times. It has never been vandalized, though they do occasionally find some "poop cavities" left behind by birds. In addition to the tree trunk tooth, the front of Dr. Santho's office is decorated with rosebushes, geraniums, and caimans during the summertime. The office was awarded the Hilltop Beautification Award for their floral display several years running. The dentist’s female assistant, whose name we did not get, is responsible for the landscaping. 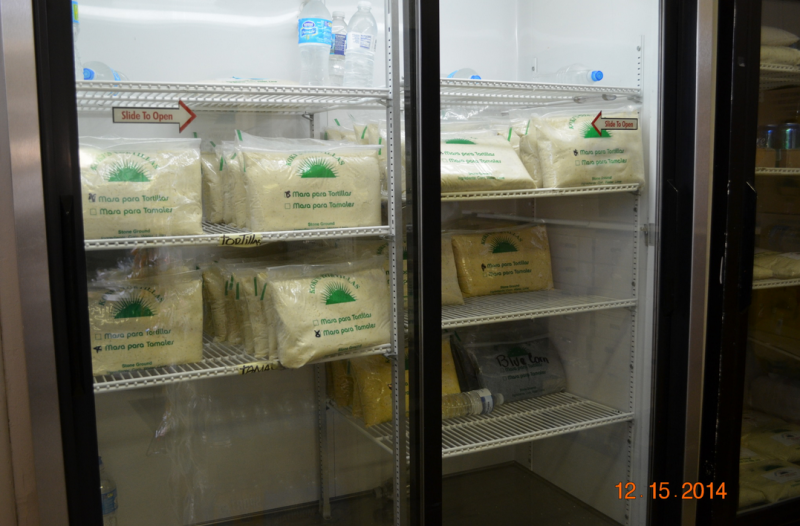 Koki's Tortillas is a homemade tortilla store in Hilltop that sells five types of tortillas: white, yellow, blue, flour, and a special type for frying.They also sell fresh masa and corn husks for making tamales. They make masa and tortillas year round and distribute throughout Columbus. From Thanksgiving to January 10th they make a special masa for holiday tamales. The owner tells us that she likes to make blue corn quesadillas with chihuahua cheese--yum!The store is named after the owner's daughter. La Bodega is located just a couple doors west of Koki's and sells Latin American foods and goods. While there, we picked up two candles, one for Tapa Boca, another for La Santa Muerte (In Devoted to Death: Santa Muerte, The Skeleton Saint, Stephen Chestnut identifies this newly popular cult figure with folks who work at night, prostitutes, petty criminals and homosexual and transgender people). Fresh pupusas are sold weekly at a cart just outside the market. The manager of Koki’s said that she thinks the little restaurant in the Saraga International Market (1265 Morse Road) is Salvadoran run. She thinks we could find pupusas there!