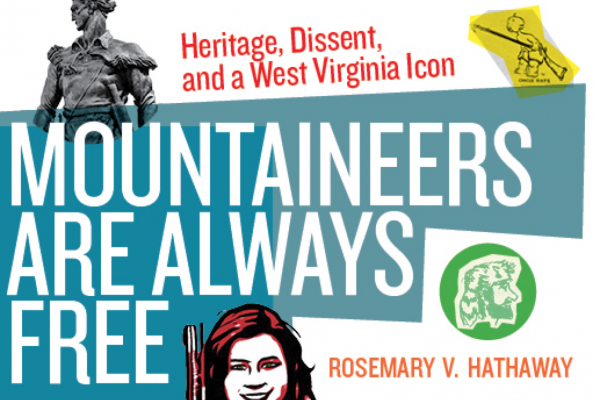 Alternately a rabble-rouser and a romantic embodiment of the state’s history, the Mountaineer has been subject to ongoing reinterpretation while consistently conveying the value of independence. Hathaway’s account draws on multiple sources, including archival research, personal history, and interviews with former students who have portrayed the mascot, to explore the complex forces and tensions animating the Mountaineer figure. Often serving as a focus for white, masculinist, and Appalachian identities in particular, the Mountaineer that emerges from this study is something distinct from the hillbilly. Frontiersman and rebel both, the Mountaineer figure traditionally and energetically resists attempts (even those by the university) to tame or contain it." --WVU press summary

When CFS asked what else she thought we should know about her recent publication, Dr. Hathaway said, "I realized at some point in the writing process that I was essentially doing the same kind of work that I did for my dissertation! There, I looked at folk and popular accounts of the Shawnee leader Tecumseh to figure out why contemporary white folks were so invested in identifying with and retelling his story. The book essentially explores the same dynamics, just in a different place and through a different cultural figure (but still a 19th century figure associated with the “frontier”). I can’t tell you how many times during the writing I was grateful for my training in both folklore and literature at Ohio State—the methods and perspectives from both were essential."