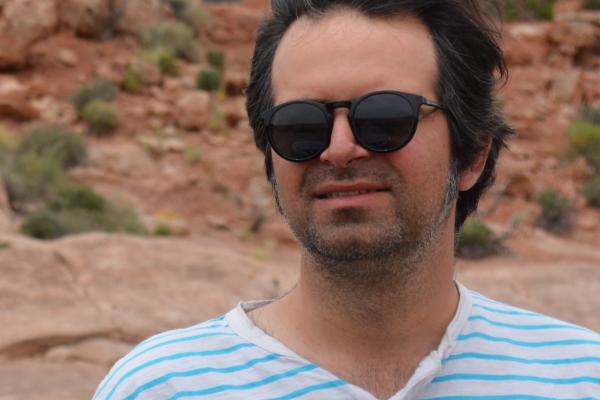 During this peculiar summer of 2020, Ehsan Estiri finished and defended his Dissertation, Talking Back to America: Discursive Processes in Iranian Angelino Public Events (see below for summary).

Throughout his doctoral program, Ehsan has been an active and valued member of our department and campus community. As a Graduate Teaching Assistant, Ehsan taught several semesters, including the undergraduate courses, NELC 2244 Films of the Middle East and NELC 3204 The Middle East in the Media. During the Fall of 2019, Ehsan co-hosted an illuminating photo exhibit Irangeles Close-Up: What Does It Mean to Be Iranian In the US? as part of the Hagerty Hall Global Gallery. In addition to teaching and sharing his scholarship, Ehsan was also actively involved with the OSU’s Council of Graduate Students throughout his graduate student career.

Dr. Estiri will be starting his new position of Visiting Assistant Professor of Folklore at Utah State this Fall.

Since the 1979 Iranian Revolution that led to the establishment of the Islamic Republic of Iran, Iranians have been subjected to stigmatization, suspicion, and discrimination in American political and media discourses and public images they create. Based on one year of ethnographic fieldwork (2017-18), Ehsan's research inquires into how Iranian Angelinos respond to and challenge these images by conducting public events such as religious rituals, national festivals, and political rallies. I study the discursivity of behaviors and objects such as the so-called “traditional” dances, clothes, cuisines, religious discussions, and political placards in the public events, and highlight how Iranian Angelinos utilize these practices to respond to the negative portrayal of Iranians in particular and Muslims in general in the US.