Tore down to rehearsal.  8:50 arrived.  New expensive building.  Entered -- stopped choir practice.  Expained my purpose to one member; he got Kovach.  Explained to Kovach.  He introduced me to members -- had me state my purpose.  I punted.  Things are not very clear to me yet.  They told me they are rehearsing because choir will be involved in the movie "Deer Hunter."
-- Nikolai Burlakoff, July 12, 1977, "Daily Journal of Fieldwork Project."

This collection offers a look into Russian-speaking and Russian-descended communities in Cleveland, Ohio in the late 1970s.  This represents the first part of a longer-term OAC engagement with Cleveland Russian communities that culminated in a travelling exhibit and written report (see Cleveland's Russians: Expressions of Ethnicity, 1979).  This 1977 project, however, was the initial survey of Cleveland Russian groups, most of which clustered around communities of faith.  In addition to the Christian Orthodox community, this collection contains items from the Cleveland congregation of The Russian-Ukrainian Evangelical Baptist Union (RUEBU), and materials relating to recently arrived Russian Jewish immigrants.  Items in this collection illustrate some of the ways that the Cleveland Jewish Community Center was working to incorporate Russian Jewish immigrants not only into American society through language instruction, but also into their faith community -- including making the case for "being Jewish" to the resettled populations (that is, sharing the beliefs and practices of the local Jewish community, which differed greatly from immigrants' experiences in the U.S.S.R.).

This collection is rich in documents (in both Russian and in English) and photographs, which are carefuly labeled, dated, and indexed.  Another unique aspect of this collection is that fieldwork was conducted during the filming of The Deer Hunter, which shot in St. Theodosius Church and Lemko Hall in the Tremont neighborhood on the Near West Side of Cleveland.  A flier in the collection calls for residents of Tremont as extras, who appear in the wedding and reception scenes in the finished film. 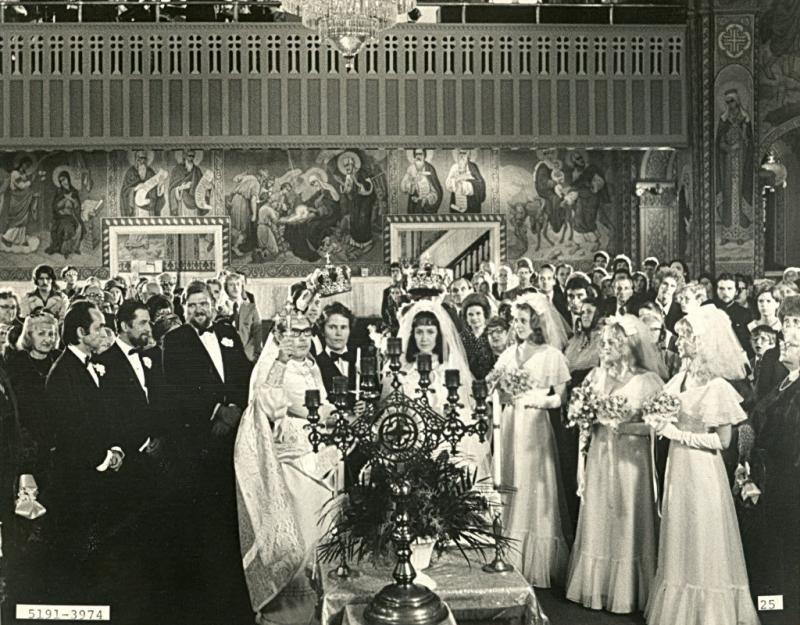 A shot from The Deer Hunter in St. Theodosius Cathedral (courtesy of Universal Pictures).

Finally, in addition to the collected materials, this collection is strenghthened by a detailed daily journal that Burlakoff kept during his month of fieldwork.  In the fieldworker's own voice, we are brought into the interworkings of these Cleveland communities. We hear about Burlakoff making connections with individuals, his discoveries and frustrations, and his personal reflections on the process of conducting short-term fieldwork.