Farms: As Places for the Past, Present and Future

Scioto County, where Ohio River and Scioto River converge, is on the borderline of Ohio and Kentucky state. Forests and farms cover that area and have become places for people to live, work, visit, do business and nostalgize. Similar to many other families, Mike Flaig’s family and Barbara Bradbury’s family have held their farms for several decades in Scioto County. These local families also welcome “fresh blood” to work on farms, which has transmitted the values of farming. Students from Wake Forest University started to volunteer on Barbara’s farm five years ago. People with different ages, social roles and cultural background interact on the farm. What are the stories of different people there? How does young generation interpret their experience on the farm? This project shows the value of the farm from the past, present, and future perspectives.

Farms are about the Past

Mike Flaig, 70, is a Minford native whose home is located behind a row of trees facing a peaceful pond. The hill next to his home is a 100 acre farm with grass, trees, a neighboring house, and a cabin built by him and his son. Mike’s experience with farming came from his parents and grandparents who believed in the importance of being self-sustaining during the Great Depression. His knowledge in farming was passed onto him by his parents.

In 1990, Mike purchased the farm with his brother, Steve. Together they pursued their vision for the farm by selling the good timber on the property to help pay for the land itself. They also purchased cattle and a registered bull to help generate income. The farm itself was a source of wealth for their family.

It would be a disservice to simply describe Mike Flaig as a farmer. As the first person in his family to graduate from College, he has served in multiple roles throughout the community as a Drivers Ed teacher, football coach, Assistant Principal, Principal, store owner, and farmer. His impressive work ethic remains consistent throughout his life as he continues to teach adult GED courses at two correctional facilities, work on the farm, and exercise regularly.

Barbara Bradbury and Kevin Bradbury, around 63, shared several similarities with Mike. They have lived on their farm for 39 years. Besides professional careers, both of them enjoy outdoor activities and hold passions for traveling, bicycling as well as playing music. In 1980, concerns about climate change and uncertainty of the future led them to move to what is now known as Hurricane Run Farm. Starting from a rough place covered by trees and snow, they built their exquisite home step by step, which is now surrounded by beautiful decorations, flowers, the voice of birds as well as wind chimes. Barbara and Kevin started gardening from the first year they arrived there, and they developed their lifestyle based on organic farming. They cherished the past and kept the valuable recordings from previous generations, including farming books and love letters from Barbara's grandparents (for more information visit: https://cfs.osu.edu/archives/collections/ohio-field-schools/bradbury-farm-books-digitization-project ). To Barbara and Kevin, “farm is not a career or a way to make life, it is a lifestyle, about how we eat.”

Farming is only one aspect of Mike’s, Barbara’s and Kevin’s identity, but the farm itself is an area where their roles as educators, parents, siblings, and caring community members converge.

Farms are about the Present

“Yesterday is the past, tomorrow is the future, but today is a gift. That is why it is called the present.” This is the sentence on one board on the restroom wall at Mike’s home. Both Mike and Barbara’s family are still working as well as living on their farms.

Mike worked with his brother, Steve, on the farm through the early 2000’s. After Steve’s passing, Mike slowed his involvement with the farm. The Flaig farm is surrounded by 3-4 miles of fence which was placed by Mike and Steve when they first purchased the property. This process, which is not for the faint of heart, took them two years and primarily serves as a barrier between the cattle and good timber areas. After 30 years, some of the wooden posts have rotted and require repair. During our time on the farm we assisted in mending a corner post fence. Mike used a traditional method which required tools such as a post hole digger, barbed wire, and staples to name a few.

Barbara and Kevin have expanded their farm from just producing food for themselves to broader functions. Food on their farm serves the local restaurants and folks. As members of OEFFA (Ohio Ecological Food and Farm Association, for more information: https://www.oeffa.org/index.php ), Barbara and Kevin are busy on Friday and Saturday from May to October. On Friday, they pick, clean and pack all the food that will be sold in the market. Sometimes, Barbara also makes bread and cookies. Saturday morning is a big gathering for members of the association and local folks in the town. People exchange products there, and they also chat or play music when it is not busy. Rather than only a place for business, the market is more about community interaction. From this point, farming involves Barbara and Kevin to a more extensive system, where their social connections are constructed or strengthened.

Every year, young people come to Barbara and Kevin’s farm to visit or volunteer. Wake Forest University students are one group of volunteers. The program at Barbara’s home has been ongoing for five years, as a part of World Wide Opportunities on Organic Farms (WWOOF, for more information: https://wwoofinternational.org ) and Wake Alternative Break (WAB, for more information: http://phi.wfu.edu/wab/  ). The main idea is to engage students in organic farming, and their work changes depending on the weather and the students’ number. However, the week at Barbara's home is not only about physical activities but also about farming experience. They arrange work by early communication through email, then share the living place and farming work; they also have chances to visit Portsmouth and surrounding areas.

Though some students had farming knowledge from their grandparents or parents before they participated in the program, it is still a very fresh experience for them to work on the farm in person. The pace on farm is different from campus, and the organic farming experience stresses the importance of food choice, as Victoria said: “making your choices is actually about living those choices.” When they knew food on Barbara's farm went to restaurants in town, they felt satisfied with their work because they could see their voluntary work was not just about themselves, but also impacted the community. This differentiates the program from other voluntary programs. 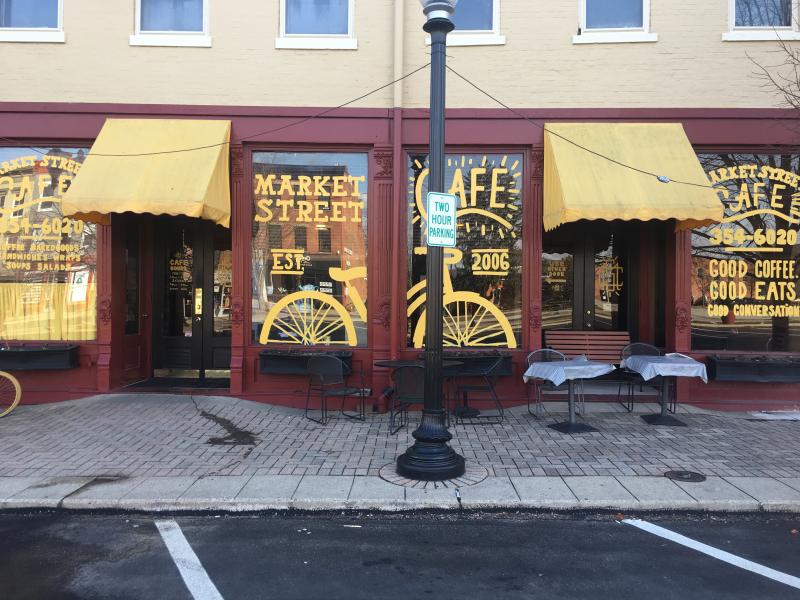 Farming is not manual labor isolated from the whole world. It involves the family, the community and broader area.

Farms are about the Future

The concern of sustainability of farms is an issue that Mike, Barbara and Kevin have worked towards. Community is an important component of farming. As Mike’s interest in maintaining the farm shifted, he was able to find a way for the farm to continue to be maintained. Mike persuaded a former student of his, Aaron,who was living in Minford and also into farming with his father, to take care of the farm. As of now and for the foreseeable future, Aaron uses the farm to raise his own cattle. “He (Aaron) cuts the hay and bushhogs. He helps on things needed…They are a good character people.” Aaron being on the farm also helps Mike by keeping the farm maintained without having a lot of work to do. This arrangement makes the space become beneficial for both parties.

Although the initial responsibilities have shifted, the original purpose of the farm continues into the future. The farm will still be maintained by having Aaron’s cattle there, and the timber will continue to be harvested every 30 years or when Mike is ready. The farm not only serves as a source of income for his family, but is a place for his grandchildren and future generations to rely on as a home.

Inviting young generations to the farm is one way for Barbara and Kevin to transmit their idea of organic farming and sustainable development. Wake Forest University students share their experience through blogs, archives and other media to a broader group of people ( for more information: https://wabwwoof.tumblr.com/). Though these students are not required to take farming as their career after graduation, one week on Barbara's farm does leave a mark on their lives. One student said this experience would be helpful to apply for an internship about sustainability in the campus garden.  Another student thought working on farm personally made her understand her father's gardening interest better. Bringing this experience back to school and family inspires them to live more sustainably, for instance, using fewer paper towels, taking shorter showers and so on. Just as Angie said in the interview: “coming here makes you realize how easy these things can be."

Having worked with both families on their farms, it is easy to see their care for their families, the land, and the community. The process of building and maintaining the farm is one that allows for moments of family bonding and communal gathering. From the lens of “farming,” we see its connection to the past, the present and the future.