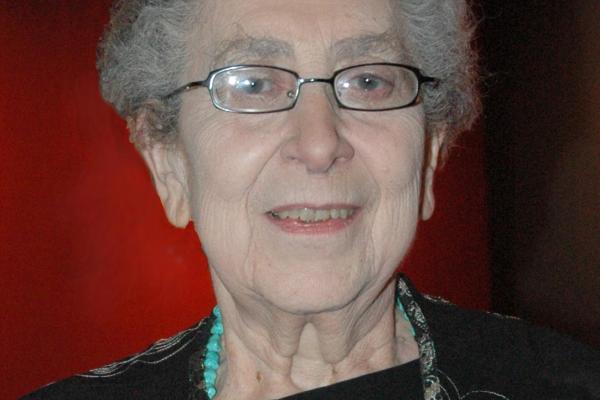 Erika Eichhorn Bourguignon, 90, died in Columbus, Ohio, February 15, 2015. She was professor emerita of anthropology at The Ohio State University, where she taught for more than 40 years. She is best known for her contributions to psychological anthropology, anthropology of religion and anthropology of women.

In February 2009, the Center for Folklore Studies hosted Mirrors and Compases: An 85th Birthday Symposium for Erika Bourguignon, and just this past October Dorothy Noyes, Katherine Borland, and Cassie Patterson met with Erika to interview her about the World Music program she and her husband, Paul-Henri Bourguignon, put on through WOSU in the 1950s. The couple was interested in illustrating how understanding music requires cultural knowledge. Dr. Bourguignon was an original signatory on Folklore Archives founder Francis Lee Utley's proposal to create what he called an "Archive of Primitive, Ethnic, and Folk Music."

Born in Vienna in 1924, Bourguignon arrived in the United States with her parents, Luitpold and Charlotte Eichhorn, in 1939; the family fled Austria after the 1938 Anschluss. She held a B.A. from Queens College, N.Y.C. (1945), and a Ph.D. from Northwestern University, Evanston (1951). At Queens she discovered anthropology, working with H. Powdermaker. At Northwestern she was greatly influenced by A. I. Hallowell and M. J. Herskovits. Bourguignon conducted fieldwork among the Chippewa in Wisconsin (1946) and in Haiti (1947–48), where she met her husband, Belgian writer and artist Paul-Henri Bourguignon.

Erika Bourguignon published seven books and more than eighty professional articles. Arriving at Ohio State in 1949, Bourguignon was a founding member of what would become the Department of Anthropology. She led the Cross-cultural Study of Dissociational States (1963–68) under a grant from National Institute for Mental Health. In the early 1970s, Bourguignon taught the first course on the anthropology of women at the university, chaired a newly formed Council on Academic Excellence for Women and, in 1971, became the first woman to chair a department in OSU’s College of Social and Behavioral Sciences.

Bourguignon was active in the Central States Anthropological Society, serving as Corresponding Secretary from 1953 through 1955. She presented the annual distinguished lecture at the 1993 CSAS meeting in Beloit.

After retirement from full-time teaching in 1990, she published, with Barbara Rigney, Exile: A Memoir of 1939 by Bourguignon’s aunt, Bronka Schneider. Bourguignon maintained her interest in Haiti, writing and lecturing on the subject. She also worked actively to promote the artwork of her late husband, Paul-Henri Bourguignon.

She is survived by a wide and diverse network of friends, colleagues and former students.

Contributions may be made in her name to The Paul and Erika Bourguignon Fund at the Columbus Foundation, Partners in Health or the Zusman Hospice.

A memorial celebration will be held at 8 p.m. Thursday, April 2, 2015 following the Annual Paul H. and Erika Bourguignon Lecture in Art and Anthropology at 7 p.m. in the Ohio Union. RSVP to Wayne Miller at miller.1044@osu.edu